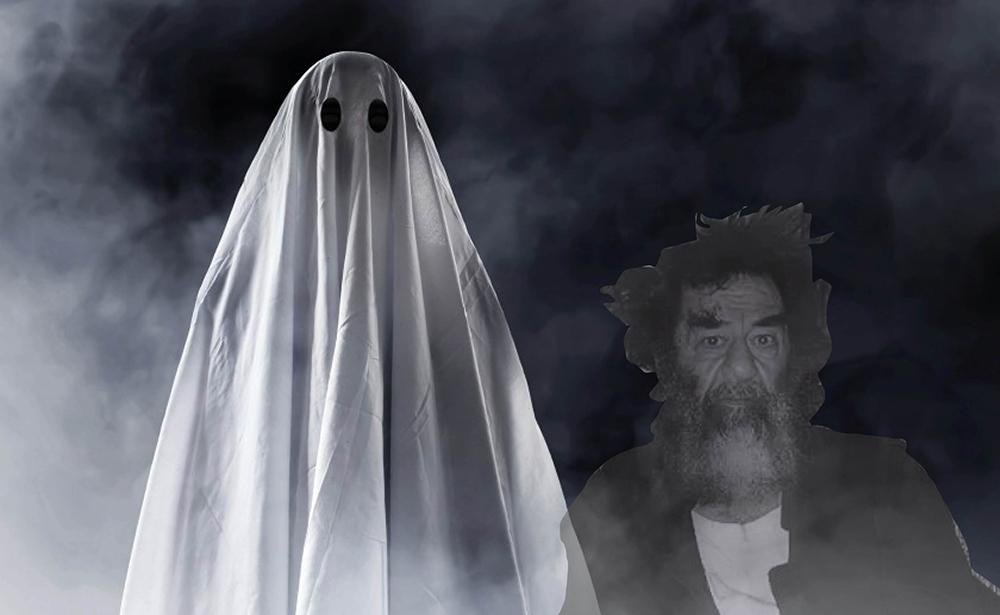 Saddam Hussein with one of his ghost mates yesterday

In an exclusive interview with The News Elephant, Saddam Hussein described the current resident of the White House’s refusal to concede as ‘beyond embarrassing, even for an infidel’ and claimed his pathetic behaviour is all anyone is talking about in dictator purgatory.

Speaking via séance, Mr Hussein, who, as per ghostly rules takes the shape of his last seen human form - so is now styled as post-incarceration, greying-beard Saddam complete with rope around his neck- was also highly critical of Donald Trump’s would-be-coup.

He wailed through the void: “Ha! He calls this a coup? Some scattered baseless legal challenges sputtered out by his cowardly lawyers outside a pornography shop? Pfft. If you’re going to stage a coup, at least have the decency to try properly. You know, put some effort in. Gas a few kurds. Whatever. Don’t just fanny about with phony legal challenges to waste everybody’s time. It’s pathetic!”

Upon being told that Donald Trump was reported to have asked about ‘options for bombing Iran’ last week, Mr Hussein responded by angrily smashing our Ouija board on the floor, and moaning the following; “Bomb Iran?! Pfft. Been there, done that. Does the man have any original ideas?”

“And for Allah’ sake – once you’re deposed, at least to do the honourable thing and cock off and hide in a hole somewhere. I mean, there are rules, man! Don’t just be sitting there Tweeting from your toilet-can! Even Mugabe had more dignity than this – and we all tease him about being the weakest. Now the weakest is Trump. Robert is very much looking forward to welcoming Trump here, so he will no longer be bottom-whining bitch-dog!”

On a lighter note, Mr Hussein concluded his apparition on our plane with the following: “You know, it’s funny. I was saying to Gaddafi and Napoleon just yesterday - - when its someone else’s country the Americans can’t change regimes fast enough – but when it is their turn – what a shameful mess! Perhaps I send Uday round to help them. Ha! In your American faces, you hypocritical camel-scrotums!”

Call to crap for the NHS