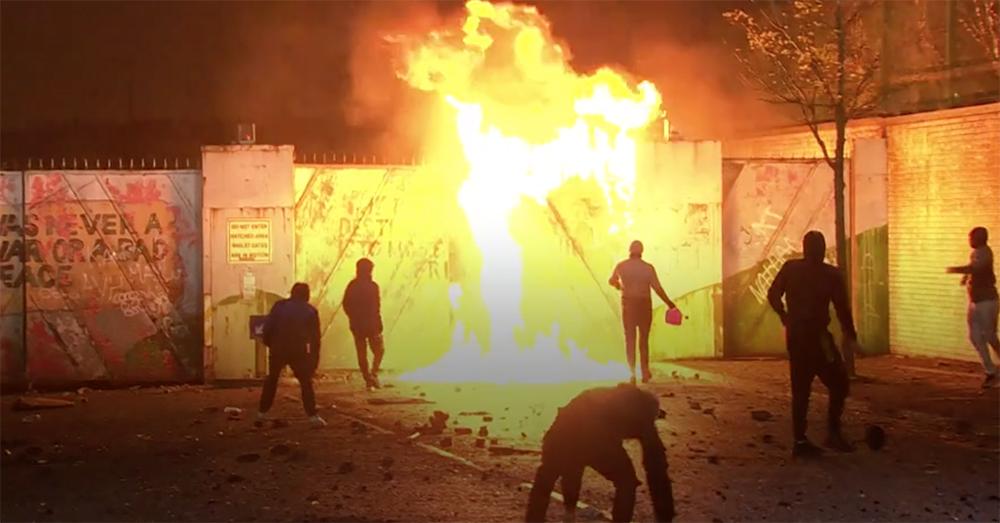 “Oh sorry, hang on a second,” says Belfast police officer Ezra Malroody. “Let me just chuck this petrol bomb back in the direction of the Shankill Road where it came from.

“Right where were we?”

After seven nights worth of sectarian violence on the streets of Belfast, no-one seems to still have a clue what’s got everyone in a tissy especially PC Malroody who along with other slightly singed officers are forming a barricade between the protestants and the catholics.

“They all just started having a bit of a ding dong doo. As a police force we haven’t got a scooby what they’re all trying to set each other on fire about. One second you’ve got loyalist paramilitary protestants chucking petrol bombs and the next second you’ve Irish Republican catholics screaming merry hell and chucking bricks.

“I thought we were all meant to be friends nowadays? I’ve even known catholics marrying protestants which 20 years ago would have been like a dog marrying a cat!

“It can’t be because of Brexit meaning that Northern Ireland is now treated on different terms than the rest of the United Kingdom with a border in the Irish Sea as The UK Government says it can’t be that and they’ve never broken their word before.

“One cause that has been bandied about by police officers is that people are upset that a large gathering breaking coronavirus rules was allowed for a senior republican called Bobby Storey in 2020 with the decision being made to not prosecute anyone who attended late last week. However there were also loyalist funerals which broke rules during the pandemic which didn’t lead to any prosecutions, so we’re still clueless about the cause!”

During a Zoom call from his Belfast home Gavin Mannofmyword, a spokesman for the UK Government, said: “There’s nothing to see here! It’s just people having a bit of a laugh after being locked down for so long and nothing to do with the UK Government effectively breaking the Good Friday Agreement by creating a hard border in the Irish Sea despite promising the opposite.

“Brexit has nothing to do with this… honest. The fact that a lot of trade has essentially been flushed down the toilet and that anyone who wants to trade with the rest of the UK now has to drown under an ocean of paperwork and that this has upset a lot of people who are now out of work, has nothing to do with it too! That tonne of graffiti all over Northern Ireland saying people are upset by this, is just fake news and Project Fear, as I bet they’re upset by something else. Probably Mrs Brown’s Boys as that always upsets me.

“Now where did I put my bullet-proof vest? I haven’t had to use it for a couple of decades so it’s probably in the attic. I bet it’s underneath my old soda stream set.”