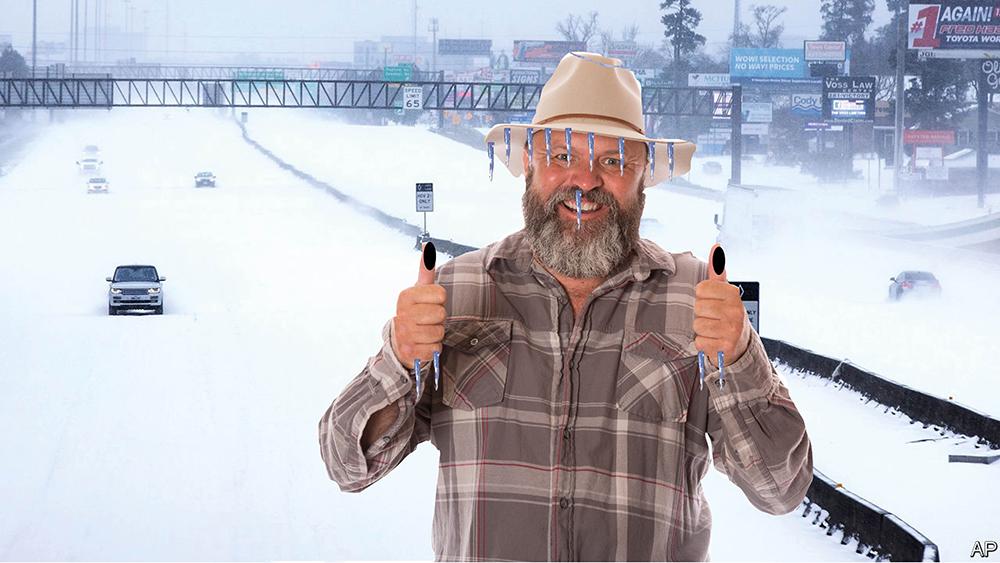 Stan, who has had no power in days and is now having to boil drinking water, was even seen walking around his neighbourhood wearing Bermuda shorts.

He said: “I don’t know what all the fuss is about. I’m just walking around completely normally as if nothing is going on at all. It’s not cold despite what everyone is saying. The climate hasn’t changed one iota. It’s always like this.

“The fact that I can no longer feel my thumbs or my toes and that they’ve turned black has nothing to do with the cold. I probably stubbed them all on the bedside as I inexplicably found myself shaking out of bed in the middle of the night.

“Alright. There’s no electricity or running water but that’s not because of the weather but because of the antifa leftists taking over the Government. They’re punishing Texas for seeing through the false election results.

“And that isn’t snow outside. Fake news. It doesn’t snow in Texas so that’s something else. Probably unwashed lefty dandruff. Bloody snowflakes.”

Mr Oilwell added: “All of these libtard meteorologists and scientists trying to blame this unnatural weather on man-made climate change are full of shit. What do they know?

“I’ve learnt more than them having watched a couple of Youtube videos than they’ve learnt in their entire academic careers. It’s all one big lie probably created by a pedophile ring using a pizza parlour’s basement in Washington.

“All my neighbours seem to be swallowing the lies. One even pretended to have frozen to death and was carted off in an ambulance this morning. Bloody attention seeker.

“They’re all sheep. I might go and join Ted Cruz in Cancun until everyone starts talking sense again. Well, I will, once my foot has grown back as it’s just inexplicably dropped off having gone entirely black first.”