Satirical website unsure what to do on April Fool’s Day, disappears in puff of logic 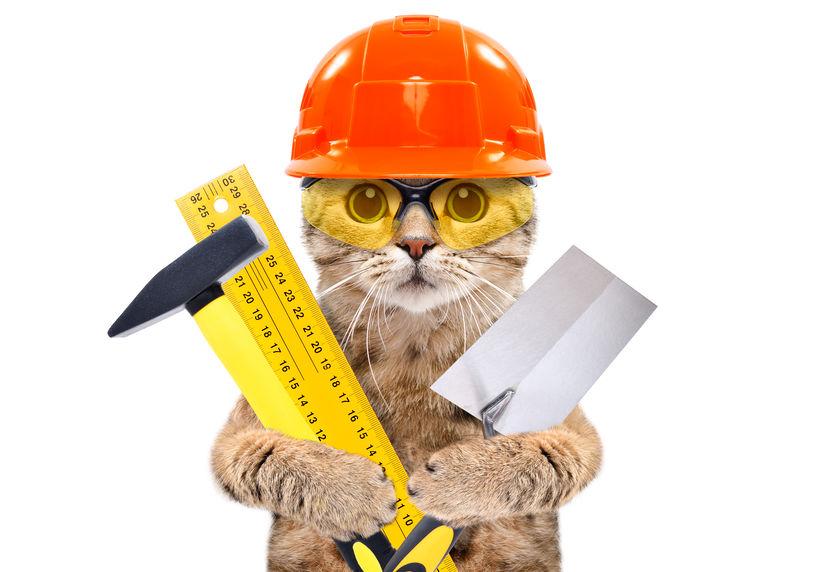 Urm.. a picture of a funny random cat who is also a builder because our minds are fried and we couldn't think of anything else to put as an image. Inside I am screaming.

Award-winning* satirical news site ‘The News Elephant’ was engulfed in existential crisis this morning, as its usually brilliant** writers were frozen in the headlights of April Fool’s Day.

The tradition of April Fool’s Day - kept alive by dads everywhere since 1845 - traditionally sees even the most luminary of news outlets such as the Guardian, the BBC and the New York Times publish transparently terrible ‘joke’ stories that make most of their highly intellectual readers roll their eyes and chuckle over their morning cup of single-estate fairtrade coffee, with only a few slower readers subsequently attempting to book themselves on a tour of their local spaghetti plantation.

However, for groundbreakingly, agreeably brilliant*** satirical websites such as the News Elephant, this causes all manner of self-aware chaos, as the usually unflappable, witty**** writers are confronted by the superfluous uselessness of their own existence between the hours of midnight and 12 noon on the 1st April, when hilarious fake stories almost as good as their own suddenly flood the internet.

“It’s like…Everyone’s a comedian this morning. I just …I don’t know what to do, or why I am even here,” said one exasperated writer.

“Writing snarky articles is how I convince myself I’m superior to my fellow fleshbags. Without the snark – I AM NOTHING!” said another, who promptly burst into tears and ran out into traffic screaming.

“Do we publish the real news this morning? Does this make me a real journalist now? Is my Dad proud of me? WHAT IS MY PURPOSE!?” said a third, who would rather not write about it, but did anyway.

“I CAN’T GO ON ANYMORE! SATIRE IS DEAD!” yelled another from atop the roof of the News Elephant offices - which stows itself secretly away at the top of one of Trump’s unused hotels – before flinging herself off the building.

At this point, the entire organisation folded in on itself and vanished into the void due to ill-advisedly attempting to contemplate the meaning of its own existence on a post-truth planet before it had had its second coffee.

In response to the massacre of expendable***** writers, the News Elephant issued the following statement to itself: “Look, we’re ironically self-aware that we’re already living in a weird era of fake news that confuses itself with satirical news. And we’re now living through the pointiest, ironiciest bit of that era, that troublingly brief window where jokey fake news is legitimate for a few hours, but real ‘fake news’ is still as problematic and fake as ever.

“It is therefore up to us, as a bastion of made-up truths in a post-truth era, to write some sort of bafflingly long-winded article about the existential crises facing satirists on April Fool’s Day, and then bring it to an unsatisfyingly nonsensical conclusion where we forget to close off all those asterisks we left strewn about the place like teenagers’ detritus in a post-lockdown Nottingham park, and then finally put our self-indulgent five-clause ramble of a sentence out of its misery with a completely meaningless phrase like news gerbils.”