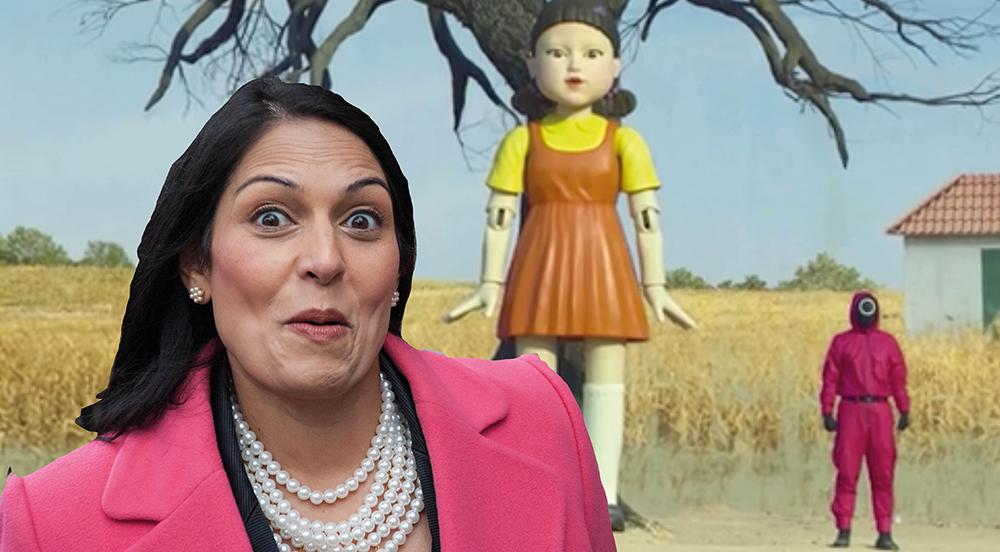 “I know,” said an excited Home Secretary Priti Patel. “We can introduce our very own Red Light Green Light for asylum seekers washing up on our shores.”

Smiling to herself whilst unfolding her legs from her bed/coffin the MP for Witham stands up and addresses her familiar that has been stood waiting to be commanded.

“Renfield, stop eating those flies and pay attention,” she scowled.

“Yes, mistress of darkness. I am at your command,” the familiar replied in a monotone voice.

Donning her cape, Priti Patel said: “I’ve just been bingeing this new show called Squid Game on Netflix. It’s fantastic and has been giving me some great ideas of what to do with all those cursed asylum seekers who keep rocking up to British shores in their ruddy rubber dinghies.

“Most of these asylum seekers have already faced death a hundred times escaping from their war-torn countries and then making the arduous and treacherous journey to get here, so facing a bit more potential death should not phase them in the slightest if they really want to live here.

“Personally, I really liked the first game of Red Light Green Light that they play on Squid Game, which is a bit like a South Korean It’s a Knockout with added machine guns and fewer members of the Royal Family.

“But in my view, the first game doesn’t end up eliminating enough people so we would probably need to play all the other games until there’s only one survivor at the end. In the show there’s about 457 original contestants/asylum seekers to start with, so that’s a really good vetting process in my view, especially when the main prize would be a terraced council house in Rotherham rather than billions of pounds.

“Renfield, be a good fella and source me 457 tracksuits, a large machine gun firing doll, a load of red overalls and masks with plus, square and triangle symbols on them? There’s a good lad.”

‘One has had enough,’ says Queen after setting corgis on litter lout