Piers Morgan to challenge Meghan Markle to a duel, cheek by jowl, and have done with it 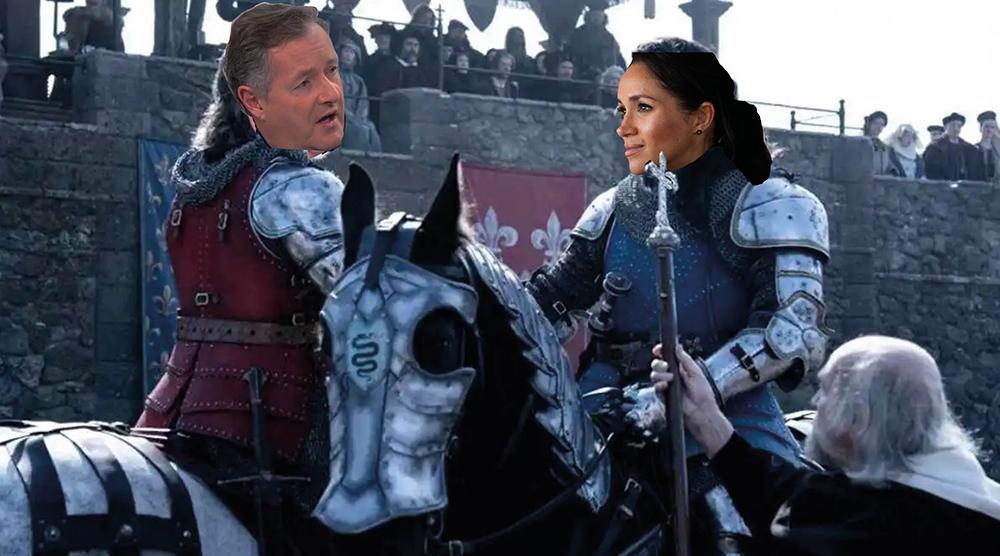 “I’ve finally had enough,” said a beetroot-coloured Piers Morgan this morning after seeing the latest coverage of his arch-nemesis Meghan Markle.

It had been a few days now since Piers had found out that Meghan would be getting a front page apology by The Mail on Sunday for some bullshit they had written about her and his rage levels hadn’t yet subsided.

“Never apologise. Never back down. That’s my mantra,” said Piers angrily. “And those namby pamby journalists at The Mail on Sunday are doing just that.

“It’s high time that someone showed this ‘woman’ what for. So I’m going to challenge her to a duel. It is not just my honour I’ll be standing up for but for all those that she is wronged just for existing and not fitting into the mold of what we expect from our Royal wives.

“So at dawn on the seventh Lord’s day after Easter, also known as Whitsun, I’ll be sitting astride my charger with lance in hand to face off against the actress princess and I will be giving no quarter.

“By lance I vow to protect our honour and then if lance fails by blade in the mud until there is only one victor and by the very blood I shed I will vanquish and restore glorious England to its former glory.”

The proposed duel has already got the backing of Piers’ new boss Rupert Murdoch, who has only asked for exclusive television rights in return.

Piers added: “Some of you out there believe that my obsession over the ‘woke princess’ stems from being ghosted by her years ago. But I’m not obsessed despite spending every waking moment thinking about her. That’s just normal.

“It’s also not about ‘race’ as has been inferred. That’s not the case at all. Nope. It’s really because she’s a woman who speaks her own mind and lives as if I don’t exist. And we can’t have that.

“She might recently have borne a child for her snowflake husband but I expect she will fight like hell. In fact I expect nothing less.

“This is all for England’s glory and not for my crushed ego at all. Honest.”