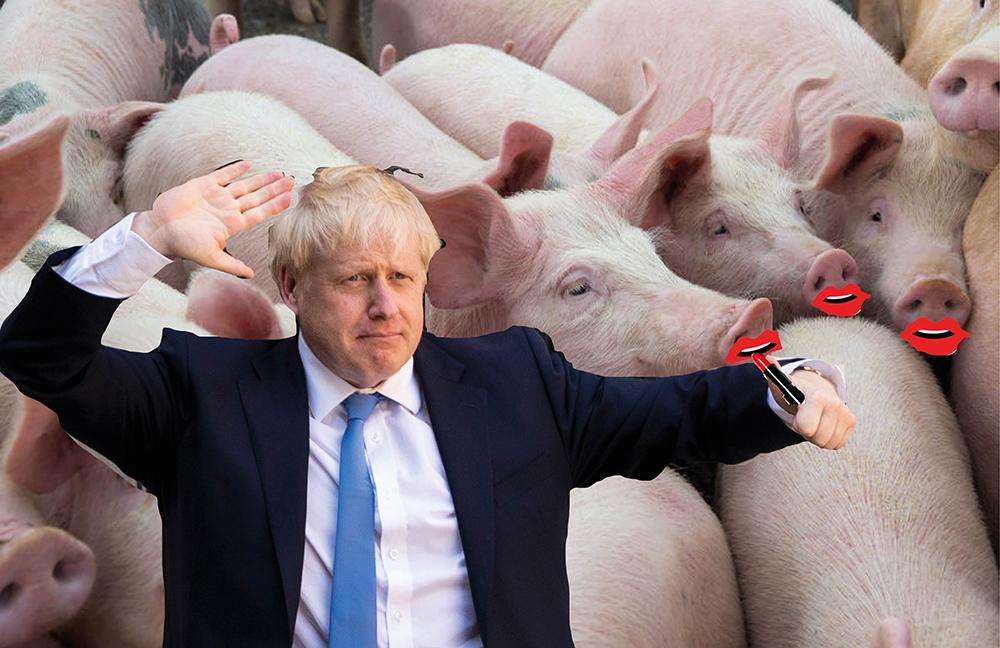 “Rest assured, this is absolutely nothing like one of Mrs May’s horrible deals that was on the table absolutely bloody ages ago. This one has loads more crossings out in it, and look-  Boris has drawn a picture of a fish at the bottom” ~ Michael Gove, Minister of Biscuits

Crates of Max Factor Infinity ‘Ruby Tuesday’ were seen arriving by the lorryload outside Number 10 yesterday, as Downing Street urgently sought to restock its supplies of best-going-out-Lippy ahead of the anticipated announcement of some sort of cobbled together Brexit deal this week.

There were also reports that several leading experts from the lesser known field of Swine Grooming – which has until now remained a niche interest mainly the preserve of Country Hog Show enthusiasts and one or two incredibly lonely farmers - were also shepherded in secretly via the back door to help officials with an urgent and secretive ‘beautification’ project, believed to be something to do with the rumoured new Brexit deal.

It’s understood significant progress on a deal was made at the weekend during a heated argument between the PM Boris Johnson and his French counterpart Emmanuel Macron about which fish was the prettiest - you know, if you absolutely had to choose - when Boris’ enthusiastic and animated impression of a flounder attempting to seduce a seagull led to him accidentally tripping over a stack of long-forgotten papers that was being used to prop up a wobbly leg under one of Jacob Rees Mogg’s ‘petitioner’ thrones.

Upon further investigation it was realised that the papers were one of the fabled ‘long-lost’ Brexit deals floated by former PM Theresa May absolutely bloody ages ago, which were at the time unceremoniously shot down by her own party for being utterly impractical and absolutely without question the worst thing ever conceived in the history of governments ever.

However, as her own party’s spectacularly incompetent pissing away of time since has now led the UK to the precipice of an economically and logistically disastrous ‘No-Deal’ scenario, that same party has now decided that perhaps this deal wasn’t so bad after all, and that with a few subtle crossings-out and drawings of fishing boats added to the margins it could perhaps look somewhat sexed-up and presentable.

Cabinet Ministers are now believed to be locked away in a room with the Swine Grooming experts, learning the art of slathering the new Brexit deal in baby oil, tying a pretty pink bow in its tail and encouraging it to pucker up saucily for the cameras.

Neighbours reported several disturbing squeals emanating from Downing Street late last night, but it was uncertain if these were related to the Brexit deal preparations, or simply the PM having another domestic with one of his mistresses.

"You can't say anything nowadays without offending snowflakes," says man deeply offended by The Vicar of Dibley