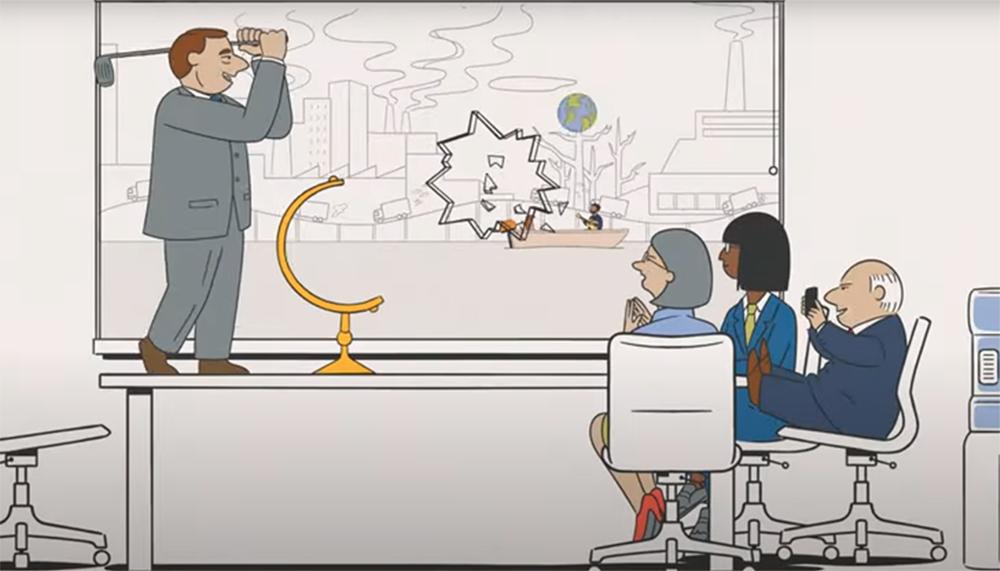 The lost lyrics apparently relate how the company is more than 90 percent owned by multi-billion dollar global mega-polluter Coca-Cola.

In the commercial, a group of cartoon people are seen sailing in a boat along an increasingly polluted river while a song tells viewers: “We’re messing up the planet, we’re messing up real good.”

At one point a besuited businessman is seen cheerfully knocking a globe of the Earth through a window with a golf club.

Finally, the people stop the boat before it goes over a filthy waterfall to its doom and begin singing about how important it is to look after the environment.

However, leading musicologists say some parts of the song are missing, presumably for reasons of time. One of the experts, Professor Rocky Raccoon of Blackpool Conservatoire, said: “According to the original handwritten manuscript of the song, a copy of which was lodged in our archive, it had several more verses.

“They detailed how the Innocent smoothies company was gradually sold off for millions of pounds to Coca-Cola, which now has a stake of more than 90 percent.

“The song also touches on Coca-Cola being one of the worst plastic polluters of its kind on the face of the planet, while an entire verse is devoted to a fairly recent study of Coca-Cola’s activities in six developing countries - China, India, Brazil, Nigeria, Mexico and the Philippines.

“According to Christian charity Tearfund, Coca-Cola created about 200,000 tonnes of plastic waste in those countries alone every year, or enough to cover 33 football pitches every day.

“This waste, the charity said, ended up being either burned or simply dumped.

“If we can track down the original recording of the song, it will be the most interesting musical find since the last set of Beatles alternate takes.”