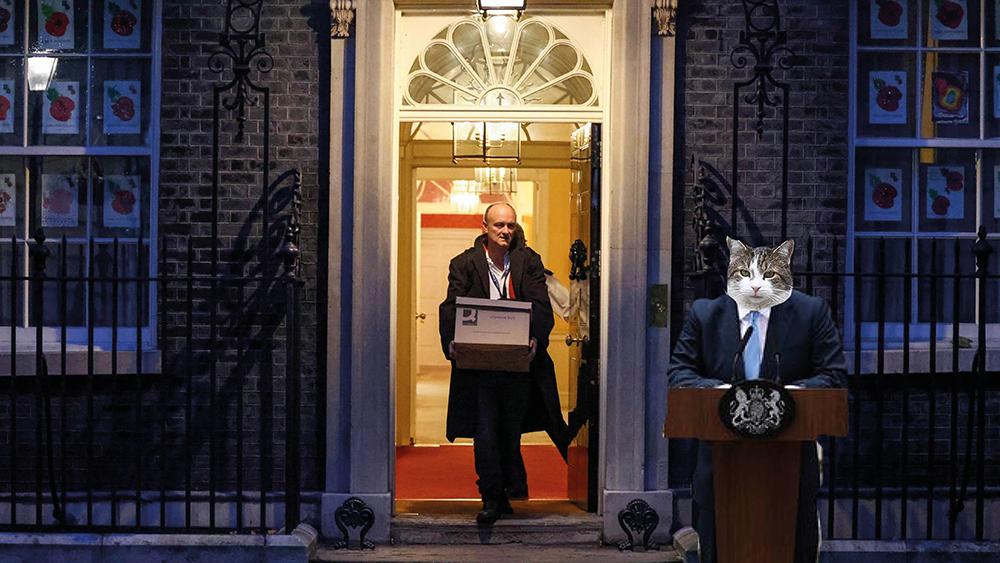 Larry the Cat, Chief Mouser to the Cabinet, announced to the world last night that he had solved the rat problem that has been plaguing Number 10 these past 18 months.

It was understood he had emerged triumphant in chasing one particular Giant Rat who, although holding no official position at Number 10, still insisted on emerging from beneath the floorboards each night, to nibble at the Prime Minister’s collection of expensive cheeses and drip odious political poison in his ear.

Boris would then wake up each morning with some ratshit crazy idea about proroguing parliament or allowing school kids to starve or breaking international laws or something, only to be forced into a series of embarrassing u-turns mere hours later when colleagues, the public, the press and his own partner pointed out how utterly stupid these ideas were.

Larry had apparently spotted the rat, who was often clad in a beanie and could frequently be heard squeaking oddball lines from children’s television shows, running out of Boris’ bedroom several times, but he’d so far always managed to get away.

However, Larry made a breakthrough when he set a cunning trap for the rat. Larry knew as soon as the PM set a new lockdown, it would only be a matter of time before the Giant Rat got bored and felt the urge to take some piss-take visit to a far-away tourist attraction. Larry patiently waited by the hole in the skirting, and as the Giant Rat emerged, carrying his suitcase and eye test charts, he pounced!

It is understood Larry toyed with the bloodied Giant Rat on the kitchen floor, whilst the PM made the final call about whether to toss it out in the garden to let nature take its course, or just put it out of its misery by hitting it over the head with a shovel. The PM eventually decided to toss the rat.

Michael Gove, the Minister of Biscuits and apparently still in government, was said to be delighted with news of the Giant Rat’s departure.

He said, “It’ll be a huge relief. Because at the moment when we have a cabinet meeting we think we’ve decided on a course of action, only for that Giant Rat to whisper in the PM’s ear again that night, and have Boris do something completely opposite the following morning.

“We never quite know what he’s going to do next, because of that meddling rat, and It’s making it extremely hard for people like me to stab him in the back because I never know which way he’ll be facing.”

T-Rex furious after being kicked out of Extinction Rebellion