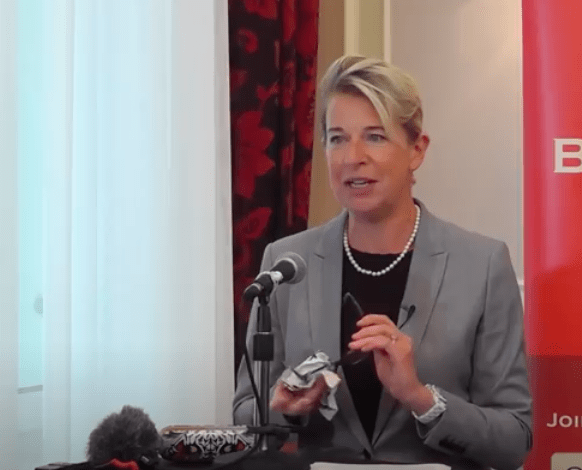 And loudmouth bigotted rentamouth Hopkins has just joined the party in time to stand for the party leadership.

Current UKIP leader Gerard Batten said: “We welcome new blood into the party especially as there’s only about two of us left and I’m so unknown that even my wife forgets who I am most of the time as she always seems to be shouting another man’s name during our monthly diaried coitus.

“We do realise that we’re a bit pointless now especially after Nigel left and that Brexit has already happened so we’ve been desperately trying to set ourselves up as the party of racist arseholes which is the reason why we’ve been courting Tommy Robinson for the past few years.

“Having Katie Hopkins join us is a major coup as at least people still remember that she exists. They might vomit a bit upon hearing her name but at least they know the name, which is more than can be said for the rest of us.”

In her first role as a member of UKIP, which long ago swapped the word ‘Independence’ from its acronym for ‘Incitement’, Hopkins will be tasked with getting the party’s messaging out to the whole of the UK.

Mr Batten added: “As Katie is banned from Twitter, we’ve tasked her to go around the entire country to get our messaging out by shouting racist bollocks through every person’s letterbox.

“This will be a new dawn for the party as the introduction of this offence home delivery service means the populace can enjoy hearing our out-dated racist dogma from the comfort of their own homes. It really is the UK Incitement Party finally joining the modern age.”

Boris Johnson's audition to be fourth gal in ‘Sex and the City’ reboot unsuccessful, HBO confirms