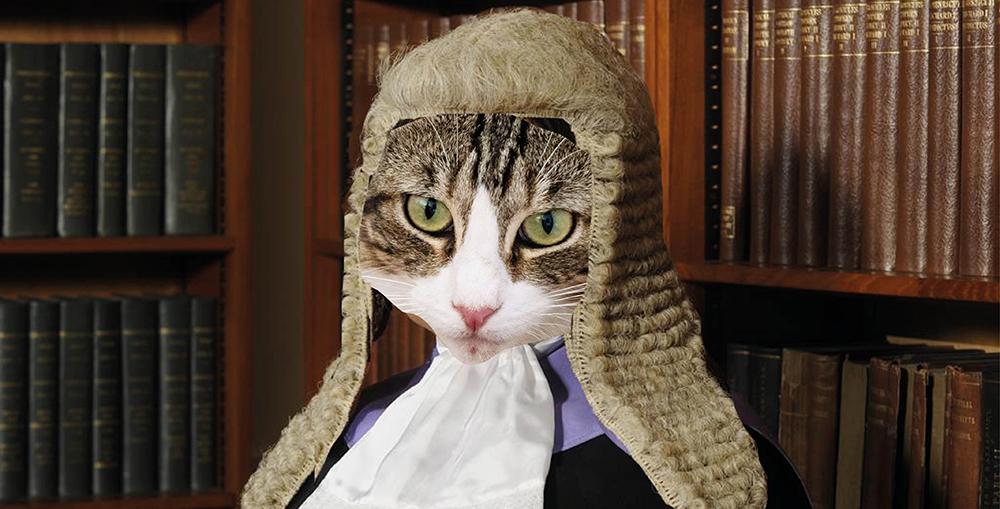 A cat is under arrest after trespassing at a London court building while impersonating a judge.

The incident happened shortly before West Ham defender Kurt Zouma appeared in the court and admitted kicking and slapping a pet Bengal.

The despicable animal abuser’s equally despicable brother, Yoan, who filmed the brutality, also admitted an offence, and both will be sentenced at a later date.

Investigating officers who arrested the cat found in the court building later discovered an inexpertly-typed note on a computer at the animal’s nearby home, saying: “1. Infiltrate court. 2. Accept plea and refuse bail. 3. Intercept van. 4. Scratch bollocks to ribbons.”

The cat found in the court building, identified only as Tiddles, was accompanied by about eight other felines - all of whom managed to escape - when it was apprehended.

Of the magistrates themselves, no trace was initially found, but within minutes court officers heard a frantic knocking from a broom cupboard and found them locked inside.

A court official said: “Suspicions were aroused when we spotted what was apparently a judge heading for the court room. This was unusual, as there are usually no judges present at Magistrates Court hearings.

“On closer investigation, it became apparent that the ‘judge’ was in fact eight cats standing on each other’s shoulders inside a black robe, with another cat on top wearing a judge’s wig. We later learned that there had been an overnight burglary at a nearby fancy dress shop.”

In late news, the Crown Prosecution Service has announced that no further action will be taken against Tiddles as he is a cat.