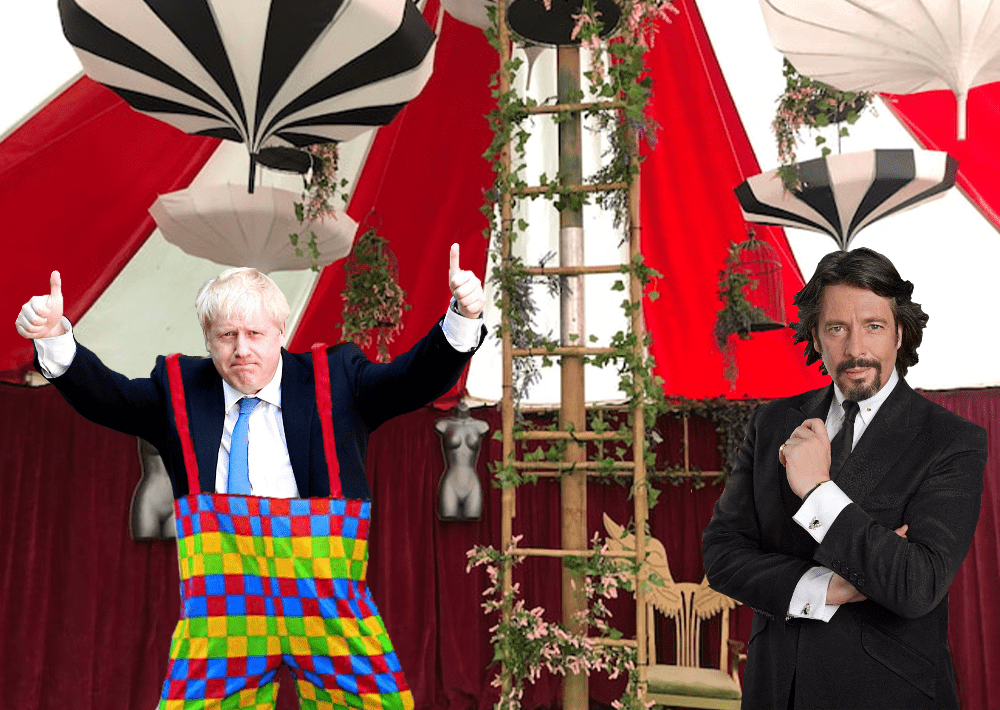 Laurence Llewelyn-Bowen and the Changing Rooms team have announced they will conduct a free circus clown themed makeover for Boris Johnson’s flat.

The team decided on this theme after conducting a poll and realising that it appropriately reflects the public’s general opinion of the Prime Minister – also adding that circus motifs are in this season.

One of Mr Johnson’s aides said: “I have never seen the Prime Minister so astonished at the notion of not scratching someone else’s back for a favour! Laurence and his team are so noble for donating their time and efforts to such a worthy household who are struggling to make ends meet regarding a home overhaul.

“I remember sitting in the office with Boris on the day Laurence delivered the news in-person, clad in a rather fetching pair of leather trousers and a pirate blouse. He, and 11 members of his design team all piled out of a Nissan Micra which we thought afterwards to be very on-theme. They showed us all these mood boards and swatches.

“It was unbelievable. Mr Llewelyn-Bowen swore us to secrecy until now and it was so hard to keep it on the Brownlow – er I mean downlow.”

After reading news of Mr Johnson’s wish for a snazzy new flat refurb and seeing the unreasonably small budget of £30,000 that was set aside for him, the Changing Rooms team said they could not sit idly by.

Laurence Llewelyn-Bowen added: “We just wanted to help Mr Johnson out. I mean could YOU do a full overhaul of a flat on the measly, free, tax-payers’ budget of £30,000? I don’t think so.

“Our plans for Boris’ pad are BIG. I’m talking an everything-but-the-kitchen-sink, top to bottom refurb. We have a slightly bigger budget for our Celebrity Changing Rooms series, and with Circus-chic being in this season – there is no better time!

“One of my favourite features is the matching chair and curtain set for the living room that I’m having made by repurposing a gorgeous vintage Big Top tent. The stripes are dazzling.”

The Changing Rooms team have posted further images and details of their plans for the Prime Minister’s flat on Instagram.

The refurbishment project will also include a lion-tamer themed kitchen complete with lions and bears in cages, where Mr Johnson can make tea to distract all the journalists he wishes to. There are plans for a juggling nook where Mr Johnson can practice juggling his daily tasks and train himself to make room for more than just his morning cycle ride, the odd televised Mr Blobby tribute, and aimless walks around hospitals, lifting up various vials and pretending he cares about the severity of the pandemic.

Head Designer Mr Llewelyn-Bowen added: “We have splurged on the little details too, to really bring our vision together. For the bedroom, we will place a little pocket Bernard Manning joke book in his bedside table, in place of the Bible. This will sit next to the joke condoms which, like his soap, will turn the old chap inky with black dye – such fun, right?! They do not prevent the risk of pregnancy, but Boris is used to that.

“We will also place a giant squeaky hammer under his bed so he can knock himself out after a long day. I mean, it must be hard to sleep at night when you are visited with constant thoughts about the austerity your party has caused right?

“We plan to have flowers in the dining area that spurt water at unsuspecting visitors – another kitsch element we felt was a must-have. His bathroom will be kitted out to give one the feeling that they have been transported backstage to a circus-clown’s dressing room. Our team agreed it would be nice to treat Mr Johnson to a new set of circus-themed beauty tools including a comb made out of spaghetti…although my researchers tell me he has been using this for years.

“Oh, and of course we have installed a novelty horn doorbell so even the blind who have come to his flat by mistake will know that a clown resides within.”