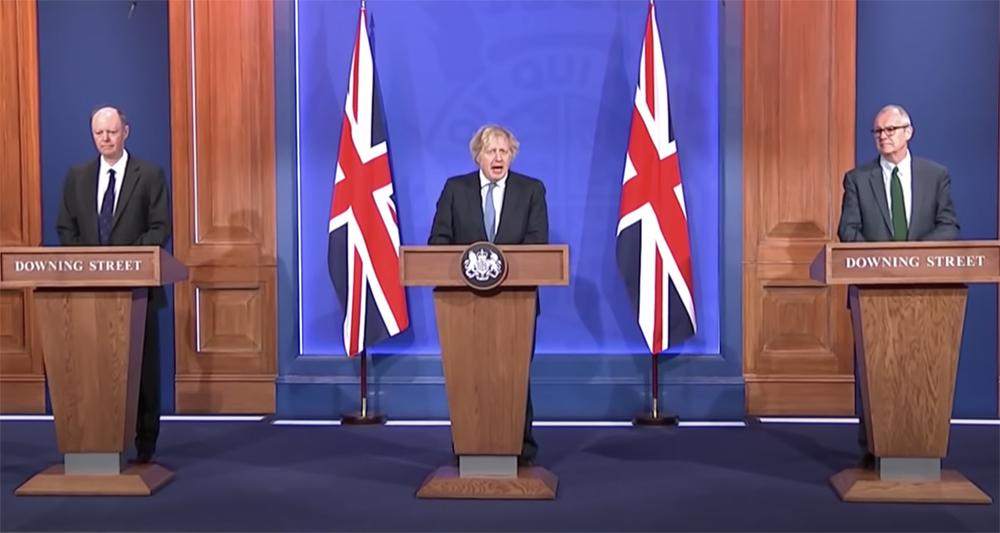 UK Prime Minister Boris Johnson stunned the nation yesterday by seemingly delivering on something he promised to do, though that joy was short lived once the nation realised he missed out some very important details.

The nation, which was otherwise engaged in a busy day of drinking in the park or gorging on chocolate eggs, briefly turned its attention to the PM’s latest edict, which this time he delivered from his glorious new briefing room, whilst draped in appropriately papal regalia and flanked by two other men who were both apparently called ‘Downing Street’.

The PM said: “And so, having glanced at the data - and having then had Mr & Mr Downing Street me give me the gist of what that data actually means- I can confirm the happy, sunny, JOYOUS, news that we will INDEED be opening all pubs, hairdressers, and shops on April 12, so sure as I arbitrarily STRESS every fourth word as if it somehow MEANS something”.

Looking very pleased with himself, the PM then settled back to enjoy the relaxed, open mic Q&A that traditionally follows his Government briefings. Only this time, everyone asked the same question.

Laura News of the BBC immediately asked: “But Prime Minister, you say ‘April 12’, but you did not specify which year. Can you confirm that it is indeed April 12, 2021 you’re talking about?”

The PM smiled and immediately responded with typical bluster: “ AH! Yes, very good. I did, INDEED say that THING, or rather, THAT thing there, of which you did so WONDERFULLY just speak, to COIN, or should I say - rather - to - er, MANGLE, a phrase! Next Question?”

“Piers Gammon, Daily Scrote. Prime Minister – you say all pubs can open on April 12th, but it’s unclear if you mean April 12th THIS year, or NEXT year, or perhaps some other year? Could you clarify that please for all the pub landlords out there who are so desperate to start trading again?”

To which the PM replied: “A rather EXCELLENT question, Piers, thank you. And Let me be CLEAR – I do of COURSE, mean, that on April 12th, the GREAT British pub, can FLING open its doors, and reclaim its rightful PLACE on the mantelpiece in the CORE of British values once again. I, MYSELF, shall be celebrating with a cool, PINT in hand that very day. Blokey Bantz, Blokey Bantz.”

However, the conference then took a sour note when a member of the public who had not been media trained and couldn’t be bothered to maintain a façade of politeness when confronted with an unrelenting wall of waffle yelled out: “FOR fuck sake, Boris. Do you mean April 12th next week or what? Just talk like a normal fucking person.”

The Prime Minister seemed taken aback, but then considered the question, and decided that the closest approximation of a ‘normal person’ that he could come up with was a sort of rambling, coin-operated scarecrow that could point at the sky and yell out random nouns when anyone got too close to it.

But after about the fifteenth non-committal noun and the increasingly irate language coming from ‘Gary in Shropshire’s mouth, Mr Downing Street (the left one) decided to jump in and save the PM by simply saying: “Next Slide Please.” At which point, the nation immediately turned off en masse, still none the wiser, but happy it could at least go back to its chocolate egg-eating.

Boris to launch new Moonshot in search of the last one